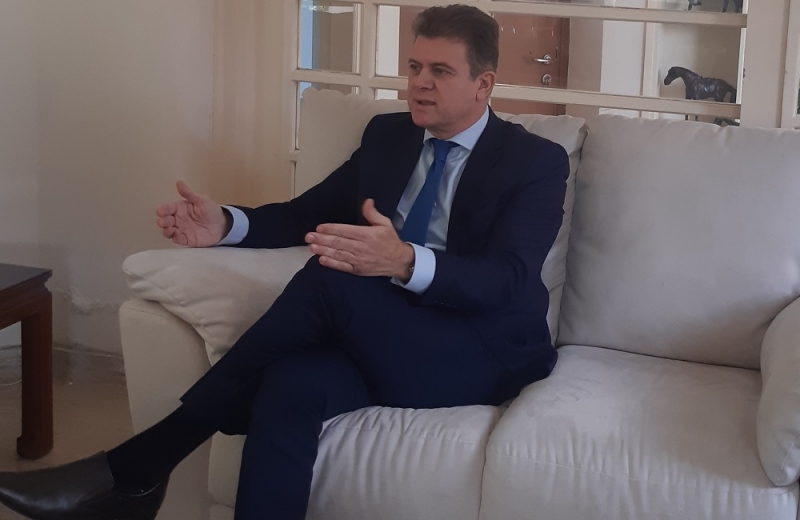 Ankara has rejected the Confidence Building Measure (MOU) for Varosi proposed by the Greek Cypriot side and has repeatedly reiterated its position on two states and sovereign equality. “Unfortunately, the Cyprus issue is in a dead end today”, notes the political analyst Christos Yagou * and explains why: “a) “sovereign equality with equal international status”, b) the inability and/or reluctance of the international factor (UN, EU, USA, UK) to exert their influence on the Turkish and Turkish sides, so that they return as soon as possible to the agreed solution framework, that is, that of the Bi-Zonal Bicommunal Federation with political equality, and c) to the mistakes, omissions and clumsy handling of President Anastasiadis and his close associates, mainly from Crans Montana onwards “. Mr. Yagou, who was also a diplomat of the Cypriot Ministry of Foreign Affairs, states that, “especially for Crans Montana it is seen through the minutes of the United Nations which have seen the light of day that President Anastasiadis, due to lack of policy and of diplomatic ability (or even reluctance?), deprived the Greek Cypriot side of the golden and probably unique opportunity to fully explore – with the help of the UN Secretary General – the possibility of resolving the Cyprus issue “. This, the analyst continues, “resulted in the Greek Cypriot side becoming completely disrespectful and unreliable towards both the international factor and our Turkish Cypriot compatriots.”

There is any light at the end of the tunnel?

Unfortunately, at this stage the only light I see at the end of the tunnel is that of the train lanterns of the consolidation of the de facto division of our homeland or even the annexation of the occupied territories to Turkey coming rapidly over us. It is our duty to fight to stop the course of this train, in order to survive as Cypriot Hellenism in the land of our ancestors. I believe that we can only achieve this through smart, methodical, targeted and visionary actions.

the integration of occupied in Turkey?

In general, I am of the opinion that Turkey still wants a solution to the Cyprus problem as a first choice. It has, however, apparently moved – from Crans Montana onwards – from federal to federal aspirations (the union of two sovereign states, possibly through a treaty, with the aim of working together on a number of issues of mutual interest). However, this position can not be accepted by us, as it essentially leads to the acceptance of the de jure division of Cyprus. Obviously, at some point, Ankara will want to implement a scenario of integration of the occupiers in Turkey, if the current situation in the Cyprus issue remains unchanged. The recent signing between Turkey and the illegal regime in the occupied territories of the “Economic and Fiscal Cooperation Agreement”, proves that the ground for such an unfavorable development has begun to be cultivated.

I do not believe that the light of the MOE has been extinguished. It is a fact that in view of the presidential elections in Turkey and Cyprus in 2023, but also the parliamentary elections in Greece in 2022 or 2023, the political climate, for obvious reasons, will not be conducive to a strong mobility in the Cyprus issue. However, the current crisis in the Aegean between Greece and Turkey (due to the recent escalation of Turkish revisionism) and the possible new crisis in the Cyprus EEZ – between the Republic of Cyprus and Turkey – in the near future, may be an opportunity to launch a new effort. through the promotion of common places of interest to create conditions where all parties will win.

Why did the Turkish side reject the generous MOE of the Greek Cypriot side, Varosi, against the illegal airport of Tympos and the occupied port of Famagusta?

I believe that the Turkish Cypriot and Turkish leadership have not yet completely rejected the specific MOE you are referring to. They have probably so far rejected the specific overall MOE package, as proposed by President Anastasiadis. Because, in my estimation, this package, a) does not include issues that satisfy Turkey's interests, which are in the fields of energy and Euro-Turkish relations, and b) it seems – due to the unreliability to which, unfortunately, the Our side – to be perceived by the Turkish and Turkish sides, but also by the international community, that this particular initiative of the government involves the element of expediency.

Mr. Tsavousoglou announced the day before yesterday from the occupied territories that soon the Turkish Cypriot side will submit its own proposals for MOE. What to expect?

I think that the latest public statements of Mevlüt Çavuşoλουlu, on the occasion of his recent illegal visit to the occupied territories, have given us a taste of the stigma of the MOE package, which the Turkish and Turkish sides seem to intend to submit in the near future. It seems that it will be a MOE for cooperation of the “TRNC” with the Republic of Cyprus, mainly in socio-economic and commercial level and on the basis of “sovereign equality with equal international status”, with the ultimate goal of creating a climate of “good neighborliness” between the parties. It is obvious that such an MOE package will be rejected by the Greek Cypriot side. However, in such a case, the Greek Cypriot side should be ready to submit and discuss a new revised MOE package, which should primarily satisfy the interests of Greek Cypriots and Turkish Cypriots, but at the same time take into account # 8217; in a constructive and creative way and Turkey's interests in the above areas.

With the new data in the Cyprus and with Turkey insisting on two states and sovereign equality, could we otherwise “serve” this MOE package to be accepted by Turkey?

It is my strong belief that we need a new, structured, balanced and creative MOE package, with a beginning, a middle and an end. Such an MOE package could restore the lost reputation and credibility of the Greek Cypriot side and create the right ground (through the elimination of timeless fears and phobias on both sides) for a future comprehensive and comprehensive solution to the Cyprus problem. More specifically, my proposal for an evolutionary or gradual solution to the Cyprus problem includes in broad terms the following: After a new informal Pentagon and adequate 3-6 months of preparation, the UN Secretary General should convene a new international conference on the Cyprus issue. to the standards of Crans Montana. At this conference the two parties to reach an Interim Agreement which includes the following:

(a) The reaffirmation of the support of the two parties: 1) in the joint statement of 11 February 2014, 2) the convergences achieved in the negotiations for a solution so far, and 3) the Guterres Framework as a future basis for negotiating a Strategic Agreement for the settlement of the Cyprus problem,

(b) The adoption of a roadmap (2-3 years) of gradual implementation of the MOE, with a pre-agreed conclusion the negotiation of the Strategic Agreement and after the overall solution,

(c) The assignment to the UN Security Council to monitor, through a special monitoring mechanism, the faithful implementation of these measures.

What could these MOEs be?

Such measures could be indicative of: (a) The return of the besieged city of Famagusta to the UN and from there to its legal residents, in exchange for the legal operation of the port of the city and the airport of Tympos, with the consent of the Republic of Cyprus and with a formula that does not refer to the recognition of the so-called “TRNC”; against the thawing by the Republic of Cyprus of the negotiating chapters of Turkey for EU accession and non-use of the veto by the Republic of Cyprus in case the issue of upgrading the Turkish customs union is raised & # 8211; EU, (c) Establishment – with the approval of the Republic of Cyprus – of a bi-communal Hydrocarbon Committee (with a view to the joint exploitation by the interested parties of the natural resources located in the Cypriot EEZ and the fair distribution of the resulting revenues) against avoidance by Turkey challenges in the Cyprus EEZ, (d) Gradual withdrawal of Turkish troops in the face of a temporary freeze on National Guard equipment, and (e) Further strengthening of cultural, educational and economic relations between the Greek Cypriot and Turkish Cypriots.

And how would these MOEs help?

By allowing the two parties to maintain their negotiating “positions of principle”, they will, on the one hand, seek to evolve (through the cultivation of total security, mutual understanding and empathy, common interests, a culture of federation and phobias, on the other hand to help Greek Cypriots and Turkish Cypriots (in cooperation with Turkey and Greece) to embark on a creative journey of cooperation in search of a future commonly accepted comprehensive reunification solution, based on “all parties win”. At the end of this roadmap, I hope that the two sides, with the support of Turkey and Greece, will return to the negotiating table and with fresh thought try to resolve the Cyprus issue as a whole, on the basis of the ICC with political equality.

Basically, you described to us your well-known proposal for MOE.

Exactly! This proposal has been submitted to the public debate, developed and refined for 17 (seventeen) years (one year after the rejection of the Annan plan) through my articles, scientific publications, interviews, and memoirs to the state and political leadership. of the country, but also to the international factor (UN, diplomatic corps). Although the power of this proposal has de facto weakened (due to a lack of understanding of its importance and untapped time), I believe that it can still, even now, if this proposal is adopted and implemented by the parties involved to provide a way out of the Cyprus impasse.