The protest outside the Parliament with abusive slogans (pics) 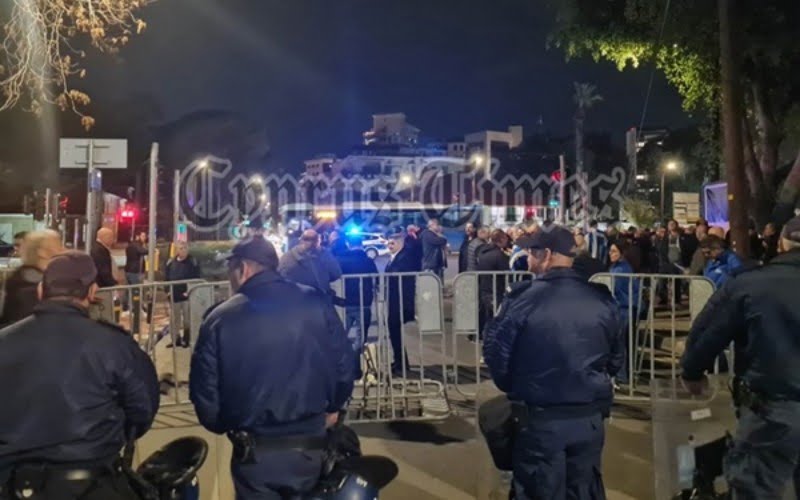 With abusive slogans the protest outside the Parliament – The Police took drastic measures – With the protesters the President of ELAM, members of his parliamentary group, ELAM officials and the independent Member of Parliament, Andreas Themistokleous

Download the CYPRUS APP TIMES! HERE for Android and HERE for iOS

With abusive slogans against MPs and other slogans like“Glory and honor to Grivas Digenis”, “EOKA again in Cyprus the mountains”, “Vagabond traitor politicians, Cyprus is Greek”, “Georgios Grivas Digenis lives, lives and guides us”, “Anarchists and Bolsheviks this land does not belongs”, “to the Turkish dogs, ax and fire”, the protest outside the House of Representatives ended late on Thursday afternoon. It is noted that during the protest, the debate and vote on the 2023 state budget was taking place inside the Parliament.

The protestors were reacting to the resolution of the Parliament, according to which, the Leader of EOKA, George Grivas Digenis, is characterized “as unworthy of any honor from the homeland”. It is noted that this was preceded by an announcement by the Georgios Grivas Digenis foundation, which called “the Greek men and women of Cyprus to a meeting” and said “we invite you to join your voice with us against the intentions of the parties of discord “AKEL-DIKO-EDEK-DIPA ».

Meanwhile, as was mentioned in a previous report by the Cyprus Times, at some point a protester threw a stone at the Parliament building. Fortunately, the detours did not extend.

The Police took draconian measures to avoid incidents with strong forces, while the road in front of the Parliament was closed at 17:00. Members of the anti-riot teams of the Police were mobilized, while railings were also installed.

Source: cyprustimes.com
Share
Facebook
Twitter
Pinterest
WhatsApp
Linkedin
Telegram
Previous article
Dinner of love for 16 needy families from the Evening School of the Lyceum and TESEK of Agios Charalambous Empas
Next article
They shouted outside the Parliament “glory and honor to Grivas Digenis” (vids)
- Advertisement -