The start of the meeting of EAC Ministers-unions is delayed 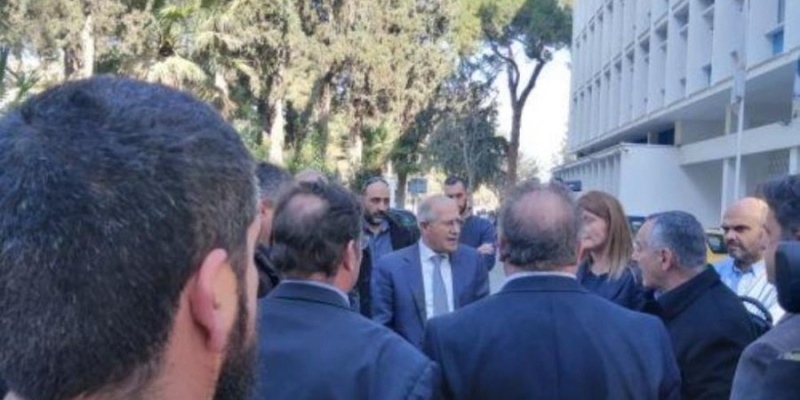 A delay was observed in the start of the meeting of the Ministers of Labour, Energy and Finance with the EAC trade unions, in Nicosia, to discuss the issues concerning the Authority, as the representatives of four of the trade unions refused to enter the room protesting the presence of a fifth guild, which, they said, disagrees with the positions of the others.

The meeting finally started at 11.15am while it was scheduled for 10.30am.

Before the start of the meeting, the Minister of Labour, Kyriakos Kousios, together with the President of the Board of Directors of AEC, Despoina Panagiotou-Dionysiou, left the room to discuss with the representatives of the four guilds, who said they would wait to enter the room when the meeting with ASTEPAIK is over.

Finally, the meeting of the Ministers with ASTEPAIK lasted about 20 minutes and after they left, the members of the other unions came to the room for a separate meeting with the Ministers.

Kyriakos Tafounas, President of EPOPAI, told KYPE , that while the meeting on the 13th of the month with Mr. Kousios was attended by the four guilds "which together for decades we have been working together for all the problems in the Organization, a fifth guild was invited under the pretext of being registered with the registrar, recently, at the meeting».

«A guild that disagreed with the positions of the four, did not participate in the measures and was on strike, and they were called to today's meeting,», he added.

He noted that their position is, if the Ministers want to see this guild and hear its opinions separately, "of course, but together, for these serious issues raised by the four guilds, the meeting will not take place".

Source: www.sigmalive.com
Share
Facebook
Twitter
Pinterest
WhatsApp
Linkedin
Telegram
Previous article
Ten patients with coronavirus have died in one week, to 2,667 new cases
Next article
Scattered meat from a truck in the GSP area – The road was closed (pics)
- Advertisement -