The unstoppable flow of Greek Cypriots to the occupied territories through the barricades of the green line has turned into a constant headache, with the ultimate goal of supplying fuel, but also various other products, since they consider it to be at a more economical price, which has the effect of reducing the sale of fuel at the gas stations located in the free areas and especially the gas stations located near the green line, which seem to be a breath away from their final closure.

The tendency to flee to the occupied territories for the supply of gasoline and oil is only contemporary it is not, since it takes time, however the ears of the authorities do not sweat and simply… they turn a blind eye to every citizen who goes to the occupied territories to buy “cheaper” fuel. In fact, due to the fact that the elections are also approaching, these days will pass in… leisurely and thus until the election of the next Government, nothing is going to change and the problem will continue to exist.

He spoke to REPORTER about the problematic situation at the roadblocks, the President of the Pancypriot Association of Petroleum Dealers, Savvas Prokopiou, who clearly worried said that, “unfortunately, the flow to the occupied territories continues to this day. We have taken some actions as we said before, but we are still waiting for some answers. But you realize that due to the elections, we will make moves after the presidential elections and we hope that this phenomenon will stop. We have repeatedly said that this flow to the occupied territories does not only concern our sector, but also concerns many sectors and these activities must at some point be stopped”.

Regarding fuel prices, however, noticeable reductions in the price of gasoline have recently been observed and prices seem to be at more bearable levels. “We still expect, maybe some reductions and we hope that these prices in the next period, will stay where they are. Today, we are averaging 1.36 in gas and about 20 cents difference in diesel, which is 1.56. When there are declines, and especially when prices are below 1.50, people don't care as much about the price of gas, because they don't have that psychological pressure. About the gas station owners now, business is breathing a little, because every cent that the price goes up, each gas station owner puts 2,000 euros out of his pocket to maintain the price for his customers, so for us it is important that the prices go down, as well as in the world”.

Prices have come down but are still high for consumers

Fuel prices may have come down, but they still remain high for consumers. As the president of the Consumers Association, Marios Drousiotis, told REPORTER, last July we had the highest fuel prices. “Since then, gasoline has dropped 46 cents, diesel 42 cents and heating oil 35 cents. These are the reductions observed. Prices today, however, compared to January 2022, have a difference of five cents in petrol, fifteen cents in diesel and 23 cents in heating oil. That is, today's prices are close to January's prices we can say with certainty”. average price all over Cyprus at the moment is 1.37 for gasoline and 1.57 for diesel, but heating oil remains at very high levels even at 1.16. If we look at January 2022 prices, we want another 23 cents reduction effectively.” 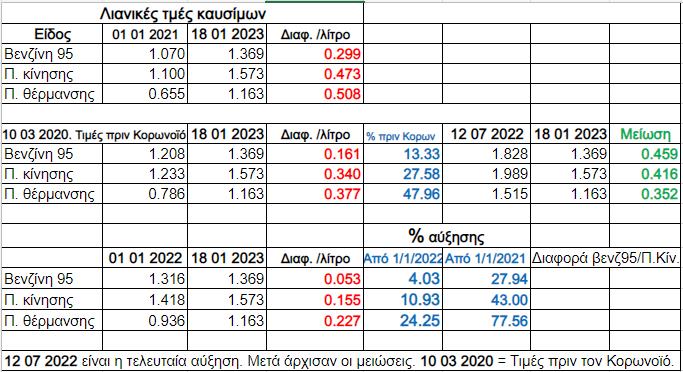