Why was the interrogation of Sizopoulos frozen? 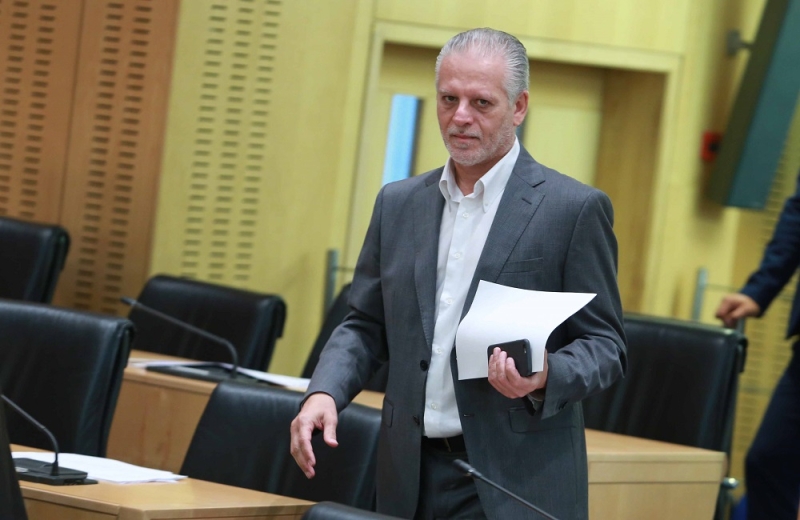 In July 2020, instructions were given by the Legal Service not to lift the immunity of the president of the SC EDEK, Marinos Sizopoulos, for a case that a prosecutor of the Legal Service (NY) handed over its file to the NY Criminal Cases File, so that it would be relevant study and that steps be taken to lift the parliamentary immunity of Mr. Sizopoulos, “for the purpose of questioning him”, after the arrest of his partner in the TAHAN company and who had admitted his involvement in the case (at the same time giving evidence that seems to lead to the lifting of parliamentary immunity). It is noted that for the rest of those involved (partners in the TAHAN company), including the one who was arrested and admitted his involvement in the case, the case has been kept “pending” ever since! Obviously, persuasive explanations should be given as to who exactly the reason(s) are, why’ this development/decision. It is noted that a few months later EDEK voted in favor of the state budget for 2021, which DIKO voted against.

The first part of the story was published by “Politis” on June 3, 2021. Today we publish the continuation of the story. But first, briefly the history of the case concerning the company TAXAN PROPERTIES DEVELOPERS LIMITED. As part of TAXAN's debt settlement, 956,000 euros of interest on a loan totaling 2,581,900 euros was written off, in which the president of EDEK was a co-guarantor, but also a director (he seems to remain until today) of the company IO REAL ESTATE LTD, which was a shareholder of TAXAN (there are still three shareholders/guarantors) and its shares belonged to his daughters (he had transferred half of them to them on 13/2/2012).

TAHAN was created on 3/2/2007 and was joined by four partners with their companies – Mr. Sizopoulos participated through IO KTIMATIKI LTD in which he was a shareholder. On 4/7/2007 TAHAN borrowed from a financial institution the sum of 600,000 pounds and on 28/1/2008 another 600,000 euros. The loan (non-performing) together with interest was on 16/10/2017, 2,581,900 euros. When the interest (956,000 euros) was granted by the financial institution, IO KTIMATIKI belonged to the daughters of Mr. Sizopoulos and he was the director of the company and guarantor of the TAHAN loan, in which IO KTIMATIKI participated together with three other shareholders. On 28/1/2010 Mr. Sizopoulos transferred his shares to a person and the same person returned them after one month, specifically on 2/3/2010. When TAHAN's loan became non-performing and reached 2,581,900 euros, the bank initiated legal proceedings. The four of TAHAN made an agreement with the bank to sell the company to an Iraqi investor, who – based on this investment – together with his wife applied for a Cypriot passport (information says they were issued in 2018). The Iraqi investor would buy TAHAN's shares at 1.6 million euros and the bank would donate the rest of the interest – almost 1,000,000 euros.

It is noted that IO REAL ESTATE LTD was created on 10/4/2008 after renaming the betting company AN. KA. BETTING LIMITED established on 4/9/2006. On 11/9/2006 Marinos Sizopoulos (he was a Member of Parliament) bought 100% of the shares of the betting company in question.

The three (including M. Sizopoulos) of the four of TAHAN gave a power of attorney to the 4th partner to proceed to make the agreement with the bank. Noteworthy is the confidentiality agreement between TAHAN and Bank of Cyprus [requesting the destruction of all documents, as well as the agreement, for a legal act – why?]: “[5] In the event that the guarantors and the company disclose to any person any confidential information and/or the bank's acceptance of the cancellation of the company's obligations arising from the banking facilities by payment of the amount mentioned above and/or the Settlement Agreement, the bank fully reserves its rights to claim compensation for any possible damage suffered from the disclosure of the above mentioned. [6] The guarantors and the company agree not to make and/or store and/or reproduce in any way any copies of confidential information and/or the Settlement Agreement. Further, the guarantors and the company are obliged as required by the bank to return and/or destroy any copies of confidential information and/or the Settlement Agreement. The Confidentiality Agreement was signed by the four directors of the companies (TAHAN shareholders) and personal guarantors of the loan, including Marinos Sizopoulos.

The power-of-attorney phase for one of TAHAN's four went awry when the relevant state department was asked to pay capital gains taxes. Different dates of sale of the company and different amounts were found, and then it entered the middle police investigation after a related complaint. Here's the story through the reports of police officers who investigated the case.

“The Criminal Investigation Department of the Police Headquarters is investigating a case concerning the possible commission of the following criminal offences, which were committed during the years 2017 – 2019:

I. Conspiracy to commit felonies,

VIII. Fraud in the sale or mortgage of property,

IX. Challenging the execution of documents by false representations,

X. Fraudulent misappropriation or keeping of false accounts or falsification of books or accounts by officers of organizations or corporations,

“[..] Testimony was obtained against PRR (the name of the 4th TAHAN/holder of the power of attorney is mentioned) [..] businessman [..] and he was arrested on a warrant today 07/09/2019 at 08:48, at offices of the investigation team for the economy, in Nicosia. The respondent gave a voluntary statement in which he admitted involvement in the case, giving, at the same time, various allegations and handed over a number of documents in support of his allegations. A warrant search followed at his home and company office in Limassol, where a number of documents were obtained as evidence. The suspect was released today 07/09/2019 at 14:55 [..]”.

“[. .] On 07/10/2019, with the instructions of the PPP (name of NY prosecutor is mentioned), the file of the case was handed over to the NY Criminal Cases Archive so that it could undergo a relevant study and steps could be taken to lift the parliamentary immunity of a specific member of the Cypriot Parliament, for the purpose of questioning him. In addition, an information letter was sent to the Tax Commissioner about the findings of the police investigation”.

«[..] The case file was returned on 05/11/19 to be examined by ETEK, regarding allegations made by PPP (the name of power of attorney holder)”.

Back to NY again

“[..] On 20/01/2020 a meeting was held at the Legal Service which was attended by the general prosecutor (s.s. Kostas Cleridis), the PPP (name of the legal service prosecutor is mentioned), DDD (the name of the senior lawyer of the Republic is mentioned) ) and BBB (two names of Police officers are mentioned). The facts of the case and the existing testimony were explained so that the Legal Service could study the way to pursue possible criminal prosecution. The attorney general decided that the case should remain in NY for further study and instructions”.

“[..] On 27/07/20 (i.e. on 10/07/2020 the new general prosecutor, Giorgos Savvidis took office) instructions were given by the Legal Service not to lift the immunity of Marinos Sizopoulos, while for the remaining involved the case will be pending. Based on the above, no further action. The case will be filed”.

The file is at the Police

Following a relevant question at the General Prosecutor's Office, we were told that “the file with the decisions is at the Police and why? it is not possible to say anything for the time being, at least.' A related question was also submitted to the Police, which confirms that the specific file is with them, archived.

In our communication with the president of the SC EDEK, Marino Sizopoulos, who was asked for his position on the matter, he commented that all this with TAHAN is an old case which was closed and ended with an agreement with the bank in 2017. I was a trapped guarantor and not a shareholder. I retired, in fact, in 2012 and gave the information to the public from the Registrar of Companies,” he added. Regarding the case of the proxy etc., Mr. Sizopoulos said that “it has nothing to do with the company issue, I can't understand why you are asking”. “It doesn't concern me, I don't care, if maybe the one who sold the property by proxy, declared another amount for the sale price and another amount to the Tax. This is not about me. I am not a shareholder of the company. I left the company in 2012. I was a stranded guarantor,” he added. In relation to the betting company AN.KA. BETTING LIMITED, Mr. Sizopoulos said that it had absolutely no betting activity, it was simply registered under that name. It is noted that in documents in possession of “Politis”, Mr. Sizopoulos appears to be signing as director of IO KTIMATIKI even after 2012.