Chr. Giannaki: Vaccination is the foundation of the primary health care system 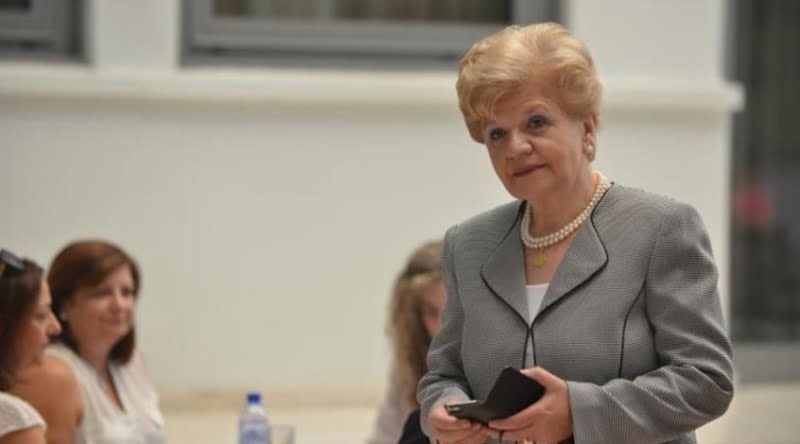 Vaccination is the foundation of the primary health care system and an indisputable human right, said the President of the National Vaccination Advisory Committee of the Ministry of Health and General Director of the Ministry, Dr. Christina Giannaki.

“It is for one of the most cost-effective health investments of the state to promote social solidarity, equal access and efficient use of resources, basic principles of our General Health System”, he added.

Speaking on Tuesday at a press conference on the work of the Ministry of Health's National Immunization Advisory Committee, in relation to the updated Immunization Schemes for children, adolescents, special groups and adults, Ms. Giannaki said that the National Vaccination Advisory Committee of the Ministry of Health was reconstituted in 2018 and in its current form in the Fall of 2021 by the Minister of Health, Michalis Chatzipantela.

He noted that the Updated Schedule of Immunizations for Children and Adolescents was implemented in late 2019 and early 2020 in NHS conditions, and new vaccines that were not included in the previous Schedule of 2012 have been added to it, including the Varicella, Hepatitis A, Meningococcal ACWY vaccine and the HPV (human papillomavirus) vaccine with its extension to boys, while in 2020, the seasonal flu vaccine was also included, while studies are underway for the introduction of others.

Ms. Giannaki stated that according to the vaccination coverage survey of the Ministry of Health (2012, 2015), the percentage of children being vaccinated in the public sector before the implementation of the NHS was around 60%, while in the private sector 40%.

He added that the cost in the previous Figure of the Ministry of Health (2012) which only concerned children vaccinated in the public sector and was €2,176,163, while in the private sector it was paid for by private expenditure.

Today, Ms. Giannaki continued, the total annual cost for all the children of the Republic of Cyprus amounts to approximately seven and a half million euros, not only because new vaccines have been proposed, but since the Scheme in question is applied free of charge to the entire population of children of the Republic of Cyprus, an important event that follows the strategy of the Ministry of Health for “Equality and Access to Health”.

He noted that the Scheme in question is fully implemented by the Children's Personal Physicians within the framework of the NHS, but also at the Maternity Protection and Child Welfare Centers of the Ministry of Health for immigrants, refugees and other uninsured groups.

At the same time, he said Ms. Giannaki, the Ministry of Health's National Vaccination Advisory Committee is in close collaboration with the Health Insurance Organization on vaccine issues, but also monitors vaccination coverage with the data it has from the Organization.

Referring to vaccination coverage data for 2021 for children and adolescents within the framework of the NHS, Mrs. Giannaki said that for example for 2021 and in the midst of a pandemic, for the new vaccines of the Children and Adolescent Scheme, the vaccination coverage was for the vaccine against the Human Papilloma Virus – HPV in teenagers (both sexes), over 90%, for the Hepatitis A vaccine, around 80% and for the Chickenpox vaccine, around 70%.

In relation to the Adult and Special Groups Immunization Scheme, he said that before their update, only the following vaccines were given free of charge: Tetanus-Diphtheria -Td Adults – if not previously given and as a booster dose every 10 years, The vaccine Hepatitis B (Hep B) – in high-risk groups, Measles-Mumps-Rubella (MMR) vaccine – in previously unvaccinated people, and Influenza – in high-risk groups.

As Ms. Giannaki said, the Schemes in question were also completed in 2019 and are being implemented gradually, while the Ministry of Health until the full implementation of within the framework of the NHS, it has ensured the access of the population, through the Adult Vaccination Centers of the Ministry of Health.

“Already the NHS has started vaccinations through GPs for a number of vaccines including flu, pneumococcal, shingles and HPV. The total annual cost for the Vaccination Scheme for Adults and Special Groups amounts to approximately ten million euros”, he added.

Ms. Giannaki said that in the context of the NHS, the total increase in costs related to vaccinations, it amounts to around 670 percent.

He noted that the update of the National Vaccination Program is one of the most effective public health interventions and at the same time a long-term investment and the assurance of the resilience of the Health System and the well-being of the citizens of the Republic of Cyprus and has a proven high benefit in relation to the cost.

He noted that these actions were implemented amid the challenges and difficulties of the COVID-19 pandemic.

At the same time, said Mrs. Giannaki, with the aim of shielding the citizens and especially those who belong to the increased risk groups, for the prevention and control of the transmission of COVID-19, the National Vaccination Advisory Committee updates its decisions at regular intervals for vaccinations against the disease, according to the new data.

As he mentioned, the recommendations of the European Medicines Agency, the recent researches in reputable journals and the epidemiological data for Cyprus concerning the positives are always taken into account cases and hospitalizations with the disease COVID-19.

Mrs. Giannaki underlined that vaccination remains the first line of defense against the disease, while according to statistics, most admissions of patients with the disease concern people who have not been vaccinated.

“Especially for booster doses, recent evidence suggests that people who had received a booster seem to be better protected by the Omicron variant than those who had not. At the same time, experience with vaccines for other diseases has shown that some require several doses to ensure long-term protection,” he added.

He noted that until November 15, 2022, the vaccination coverage rate with primary vaccination against COVID- 19 in the population over the age of eighteen, it was 86.1%, while at older ages this percentage increases.

In relation to the booster dose, Ms. Giannaki said that 73.3% of the population over the age of eighteen were vaccinated, including the 3rd, 4th and 5th doses, while again at older ages the percentage of vaccinated increases – especially for the 4th booster.

In daily number of vaccinations from September 20, 2022, he continued, there is an increasing trend for both booster and 4th dose vaccination.

He stressed that for booster doses, only updated Pfizer vaccines are used ( BA.4 and 5) and Moderna (BA.1).

He reminded that the vaccinations are carried out at the Vaccination Centers against the COVID-19 Disease, walk-in on a Pan-Cypriot basis, at home and with organized crews of the Ministry of Health where they visit Shelters, Closed structures and mountainous areas.

He noted that vaccinations for infants and children from six months to 4 years old also begin today, at the Maternity and Child Protection Centers.

As he mentioned, according to the World Health Organization, vaccination is the best defense against serious, preventable and sometimes fatal, communicable diseases. Thanks to widespread vaccination, diseases such as poliomyelitis and many others have almost been eliminated.

“According to the European Commission, the COVID-19 pandemic has exacerbated this situation, posing challenges to the continuity of regular vaccination programmes. Factors related to vaccination hesitancy, or concerns about vaccine safety and efficacy, play a key role in relation to vaccination coverage,” he added.

He noted that confidence in vaccines and vaccination policies , in professionals as well as in the health sector is a key driver of vaccination behaviors.

Therefore, said Mrs. Giannaki, the main objective of the National Vaccination Advisory Committee of the Ministry of Health  is to increase vaccination coverage rates in Cyprus, through the establishment of policies to enlighten and strengthen vaccination.

The focus of this effort, he continued, is to facilitate the access of both citizens and health professionals to vaccines, so that it is easy, simple and timely.

Regarding the safety of vaccines, Ms. Giannaki said that there are very strict rules within the European Union for the approval of vaccines that are on the market.< /p>