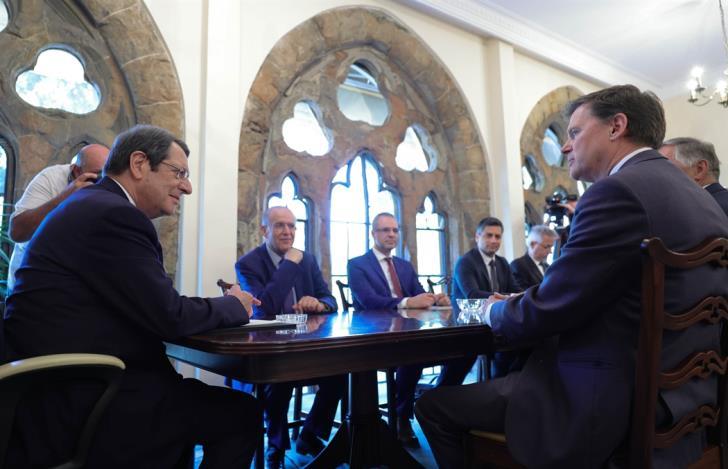 Colin Stewart was yesterday at the Presidential Palace in a mainly ceremonial meeting with President Anastasiadis, listening and recording positions in view of the preparation of the report of the UN Secretary General. In a meeting during which the Special Representative spoke about the need to build trust between the people of the two communities, on the occasion of the cooperation to extinguish the catastrophic fires in Pentadaktylos. Confidence, of course, which “took a very wrong direction”, as he said, with the result that the process for achieving peace in Cyprus can not proceed. & Nbsp;

President Anastasiadis raised with Colin Stuart the issue of illegal Turkish actions in Famagusta and the instrumentalization of immigration by Turkey, indicating that 95% of the cases that arrive through the dead zone come through Turkey. Nikos Anastasiadis also reiterated his readiness to return to negotiations, stressing that he himself submitted the proposal for bold confidence-building measures which were rejected by the Turkish side. At the same time, as we are informed, he pointed out that this also shows who is working to create a climate of trust.

As Mr. Pelekanos characteristically stated, during the meeting, the President of the Republic, developed the firm positions of the Greek Cypriot side and expressed his regret for the rejection of his proposals for the adoption of bold confidence-building measures that would create the appropriate climate for the resumption of negotiations.

“The President also stressed his strong concern over the new accomplishments that Turkey is pursuing, but also the unacceptable rhetoric being developed by the Turkish government and those representing it in the Turkish Cypriot community.”

Following the meeting, the Special Representative of the UN Secretary-General for Cyprus, Colin Stewart, told reporters that his visit to the President took place prior to his visit to New York on the issue of renewing UNFICYP's tenure. & Nbsp;

He added that they had a very good meeting during which he thanked him for the support of the Greek Cypriots to the Turkish Cypriots during the devastating fires in the occupied territories a few days ago. & nbsp;

He also noted that this assistance demonstrates the key point for Cyprus regarding the solidarity of the Cypriots between them, when at the given moment there was direct and unquestionable assistance from the Greek Cypriots to the Turkish Cypriots. & Nbsp;

He also said that during their meeting they discussed the need to build trust among the people as a basis for finding a way for the political process to resolve the Cyprus issue. & Nbsp;

He also noted that the The issue of trust has gone in the wrong direction and without trust it will be very difficult to move the process forward. & nbsp;

In a post on the United Nations Twitter account in Cyprus last Friday, the UN Secretary-General's Special Representative in Cyprus, Colin Stewart, stated that he “appreciates the efforts made “Nikos Anastasiadis and the Greek Cypriot community for their assistance to the Turkish Cypriot community in combating the fire and thanking the United Kingdom, Israel and Turkey for their support of Ersin Tatar and all those affected.” The avoidance of referring to President Anastasiadis and the Republic of Cyprus did not go unnoticed and as we are informed, it was unofficially indicated as a omission. Then the post came down completely.

Source: www.philenews.com
Share
Facebook
Twitter
Pinterest
WhatsApp
Linkedin
Telegram
Previous article
New damage to Hagia Sophia – The marbles on the floor were broken
Next article
Four state towers in the center of Nicosia at a cost of € 110 million.
- Advertisement -