Metropolitan of Paphos: “It will take centuries for the Church of Cyprus to escape from his shadow” 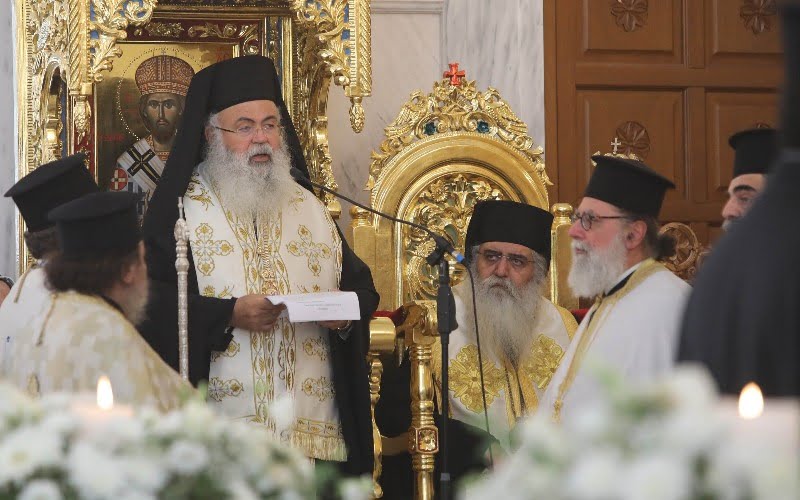 The funeral of the Archbishop of Cyprus Chrysostom II was held, in the Cathedral of the Apostle Barnabas in the Archdiocese, Nicosia November 12, 2022. The funeral procession was led by the Archbishop of Constantinople and Ecumenical Patriarch Bartholomew, with the members of the Holy Synod of Church of Cyprus. The burial took place in a special grave under the Cathedral.

Above all eulogies, the works of Archbishop Chrysostomos B, said the Metropolitan of Paphos – “It will take centuries for the Church of Cyprus to escape, if it can escape, from his shadow”

The works carried out by m. Archbishop of Cyprus Chrysostomos Band the cuts he brought to the administration of the Autocephalous Church, in the 16 years of his Archdiocese, are far superior to any words and any eulogies, emphasized Paphos Metropolitan George in his funeral speech for the Archbishop during the exodus service at the Cathedral of Apostle Barnabas.

The Metropolitan of Paphos said, describing the offer of the exile, that “Archbishop Chrysostomos II was one of the people who measure History with stellar years and their lives with the cubit of responsibility. The examination of his works testifies to his multifaceted and laborious activity”.

Especially as Primate, he said, he left an indelible mark on his character. “It will take centuries for the Church of Cyprus to escape, if it can escape, from his shadow”, he emphasized. , noted Paphos Georgios, “he labored selflessly and spent himself with zeal, walking many times to the border of doubt and disapproval and accomplished a task that none of his predecessors could accomplish”.