Strong storms are expected to hit Cyprus, with the Meteorological Service issuing a yellow warning, which will come into effect at dawn.

According to the Meteorological Service, isolated strong storms are likely to affect initially the beaches and later other areas of the island. In such a case, the intensity of the rain is expected to vary between 35 and 60 millimeters per hour, while hail is also likely to fall. 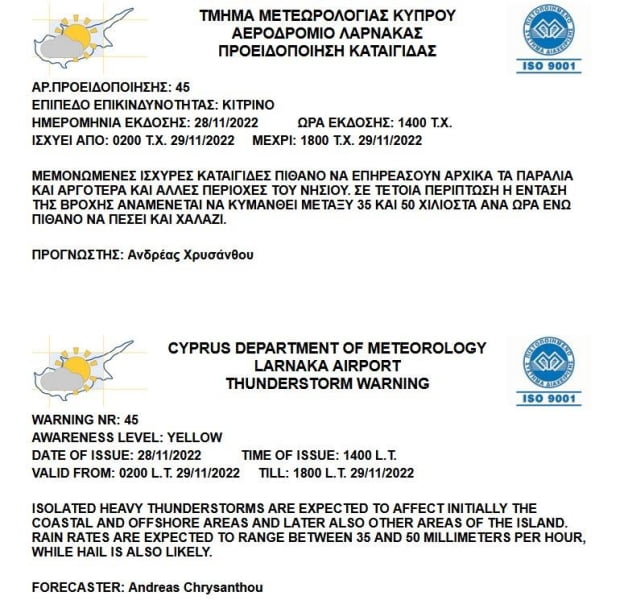 Tonight the weather will be mostly cloudy, while isolated showers and isolated storms are expected later, mainly in the coastal areas of the island. Winds will be mainly northeast to southeast, light to moderate, 3 to 4 Beaufort and locally moderate, 4 Beaufort. The sea on the western coasts will be a little rough while on the rest of the coasts it will be a little rough to rough. The temperature will drop to around 12 degrees in the interior, around 15 on the coast and around 6 degrees in the higher mountains.

Tomorrow the weather will be mostly cloudy with local rains and isolated storms, initially mainly on the coasts and later in the mountains and inland areas. In a storm, hail is also possible. Winds will be mainly northeast to southeast, light to moderate, 3 to 4 Beaufort and locally moderate, 4 Beaufort. In a storm, however, it is possible for them to increase to 5 to 6 Beaufort, with stronger gusts. The sea will generally be a bit rough, but initially on the northern and eastern coasts it will be rough. The temperature will rise to around 20 degrees in the interior and on the coasts and around 10 degrees in the higher mountains.

On Wednesday and Thursday, locally increased clouds that will be observed temporarily, may give isolated showers, mainly in the mountains but also in inland areas. On Wednesday, the possibility of an isolated storm is not ruled out, mainly on the southeast coast. During the morning hours, in the interior as well as in areas to the east of the island, a thin fog or even low clouds may form.

On Friday the weather will be mostly clear, however, temporarily increased clouds that will be observed , likely to give isolated rain mainly in the mountains.

The temperature on Wednesday is expected to rise slightly, while no significant change is expected until Friday, to remain slightly above the average climatic values ​​for the season.