Stability is a first concern for Nicosia and Athens 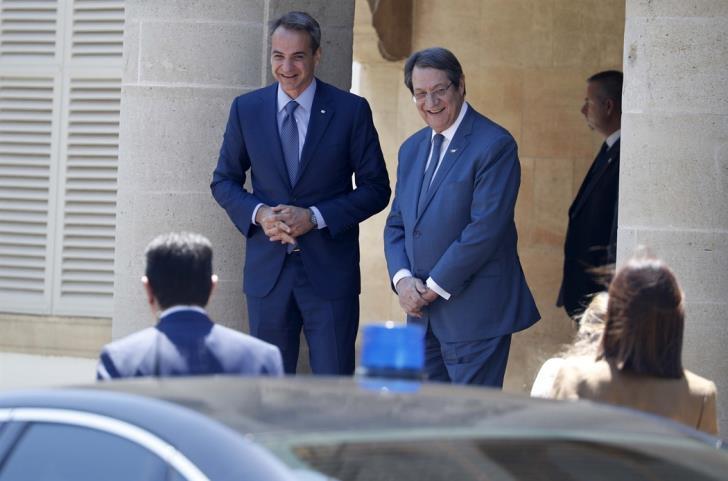 Maintaining stability in the region is the first concern for both countries, with Nikos Anastasiadis and Kyriakos Mitsotakis agreeing that the moves and policies they will continue to pursue should be aimed at de-escalating tensions. At the same time, they agreed that their movements should be coordinated and without adding fuel to the fire lit by the Turkish side. Both during the one-on-one meeting and after the talks between the delegations of the two countries, the two leaders agreed to monitor all developments and to be in constant contact. On Monday, President Anastasiadis will brief the National Council on all developments in the Cyprus issue and the Turkish challenges. & Nbsp;

Government sources stated that Kyriakos Mitsotakis during his meeting with the President of the Republic reiterated his support for a just and sustainable solution to the Cyprus problem, while underlining his support for the proposals for the Confidence Building Measures submitted by Mr. Anastasiadis.

Developments in the energy sector at the regional level were also discussed, as the need to get rid of Russian fossil fuels and diversification of energy sources, bring the Eastern Mediterranean back to the forefront of energy developments and the debate on Europe's energy security.

According to our information, during the talks of the two leaders, the developments in the energy sector as they arise as a result of the war in Ukraine and the attempt of Europe to become independent from Russia were also examined. According to our information, a common assessment of Athens and Nicosia is that Europe is in a hurry to find alternative sources in order to obtain the necessary quantities of natural gas. & Nbsp;

Welcoming Mr. Mitsotakis, the President of the Republic said that his presence in Cyprus takes place at a time when coordination and mutual information are perhaps among the most imperative. To date, he noted, at any critical juncture or not yet critical, the cooperation between us is so flawless, so that we can act and govern in the most beneficial way for our homelands.

“I want to express my absolute satisfaction because the whole management of a rhetoric foreign to our mentality, on the part of the Greek government, is such that it definitely weakens and neutralizes the goals that some with revisionist views and perceptions may have. The same tactics and policies are followed by us. “International law is our protection and of course our strong alliances and our presence in the EU,” he said. The president said that the European Council next week and later the EU-NATO meeting would also send more the messages of avoiding any challenges from anyone who challenges the sovereignty and territorial integrity of either Greece or Cyprus are louder.

Prime Minister Mitsotakis said the visit was an opportunity to reaffirm our common coordination in addressing the major geopolitical challenges largely as a result of the Russian invasion of Ukraine, but also to coordinate our action against the unrest that has recently been observed in the east. Mediterranean.

“You are right to say that our defense, of Greece and Cyprus, against any revisionist sentiments is international law, it is our strong alliances, it is our participation in the European family and with calm determination and composure we will always oppose any rhetoric. “goes beyond the rules of good diplomatic practice,” he noted.

He estimated that this approach is ultimately the right one and that we will soon be able to return to calmer waters, always keeping open channels of communication which, even in the most difficult times, should never be closed. “We will also have the opportunity to discuss developments in the context of rising energy prices and inflationary pressures on our economies. “Greece and Cyprus have an important role to play in this debate, which takes place on the exploitation of the energy resources of the eastern Mediterranean and will be an opportunity once again to coordinate our movements,” he said.

The Greek Prime Minister said that we all need strong defenses against inflationary pressures and the good performance of the economies of the two countries is the best guarantee that we can continue to support our citizens and businesses to face this imported precision, which is gnawing. their disposable income.

“Let Greece see for itself what it will do from now on,” said the Turkish President. “I said that we have finished our meetings with Greece. What does this mean; There is probably no more open reaction. “Let Greece look at what it will do from now on,” the Turkish President said in statements after Friday prayers. Erdogan's remarks came less than 24 hours after the two countries' defense ministers met in a bid to tone down and improve the climate. & Nbsp;

President Anastasiadis also thanked for the generous donation of a civilian aircraft for the travels of the President or the Ministers. “It is a donation to the Republic of Cyprus and I am glad because it is made at a time when I am at the end of my term, so that no one gives either me or you any other incentives,” said the President of the Republic. He also thanked for the donation of the Greek Government for the construction of a fire station in mountainous Larnaca which will cost about 650-700,000 euros. Commenting on the donation of the civilian aircraft and the contribution to the construction of a fire station, K. Mitsotakis said that it is a small return to the large donation that Cyprus made “to close the wounds from the catastrophic fire in Mati”.

“We managed with great difficulty to issue the decree for the location in Mati, a mission that normally takes decades for the Greek public administration, to have to intervene in a very large area that carries great sins from the past is not “It's an easy task,” he said. “An official can appear and be represented by an aircraft, which will carry the colors and the flag of the Republic of Cyprus”, he stressed.