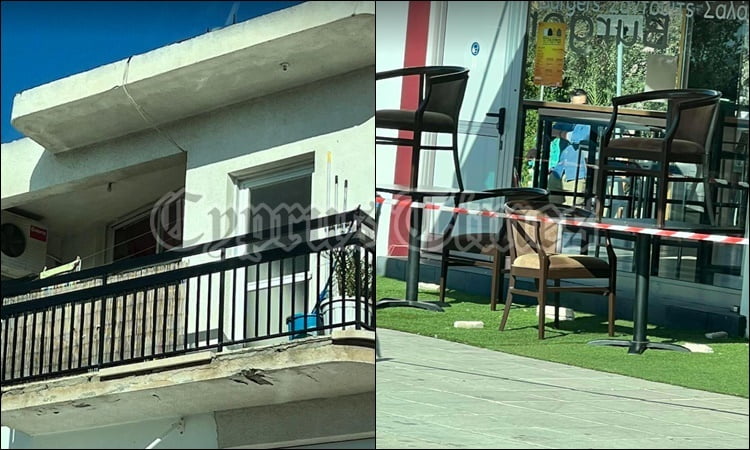 A section of balcony fell on Monday in Latsia, the Municipality of Latsia says in a statement issued on Tuesday /strong>, who sounds the alarm regarding the issue of outdated and unmaintained apartment buildings.

It is reported that on the occasion of the incident on Monday, October 24, in which a mosaic ledge from the balcony of a private building detached itself and fell onto the site of the building on Giannou Kranidiotis Avenue in Latsia, competent officials of the Municipality immediately visited and inspected the building. The dangerous area was immediately cordoned off by the Municipality Workshops.

It is noted that the owners were informed in accordance with the provisions of the Law on Municipalities as well as the Regulation of Roads and Buildings. They were given a notice to take all the necessary measures within a regular period to remove the danger.

Furthermore, the Municipality of Latsia reminds property owners regarding the obligation of regular maintenance of their buildings. “Therefore, the Technical Service of the Municipality will continue the intensive checks and inspections of the buildings within the municipal limits of Latsia and will abandon those who fail, in order to remove any risk to their developments,” it is added.

Source: cyprustimes.com
Share
Facebook
Twitter
Pinterest
WhatsApp
Linkedin
Telegram
Previous article
UNFICYP's response to the incident in Denia
Next article
A forest fire in the area of ​​the Stavrokonnos community is under complete control
- Advertisement -