A condolence book for Archbishop Chrysostomos is opened in the Archdiocese 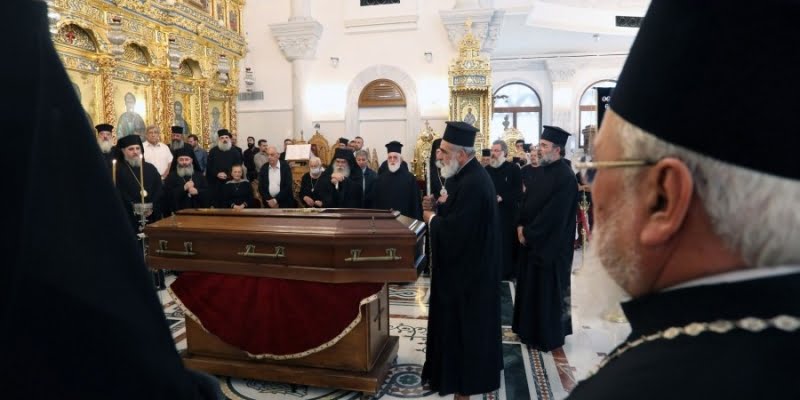 A book of condolences is opened today at 10 am in the Office of the Blessed Archbishop of Cyprus Chrysostom II in the Holy Archdiocese, which will remain open until noon on Friday.

According to the decisions of yesterday's extraordinary meeting of the Holy Synod, the body of the Archbishop will be exposed in a popular pilgrimage to the Cathedral of the Apostle Barnabas in the Archdiocese from Thursday to Saturday morning, before the funeral, which will be held at 12 noon.

It should be noted that the Archbishop of Constantinople and Ecumenical Patriarch Mr. Bartholomew, who is visiting Cyprus for the first time.

The body of Archbishop Chrysostomos will be buried in the tomb prepared by the Blessed under the Cathedral of the Apostle Barnabas, as was his wish.

Yesterday, the Council of Ministers in its extraordinary session decided to declare public mourning for the death of Archbishop Chrysostomos B' until the day of his funeral, on Saturday.

According to the decisions taken under the presidency of the President of the Republic, Speaker of the House of Representatives, Annita Dimitriou, during the period of public mourning, all the official events.

The funeral service at the funeral of the Archbishop – where the members of the Council of Ministers and other officials will also attend – the President of the Republic, Nikos Anastasiadis, will speak.

Share
Facebook
Twitter
Pinterest
WhatsApp
Linkedin
Telegram
Previous article
The handwritten ballot, who votes and the possibility of election by lottery
Next article
He was robbed of 275,000 euros, selling him investments – Two arrests in Limassol
- Advertisement -