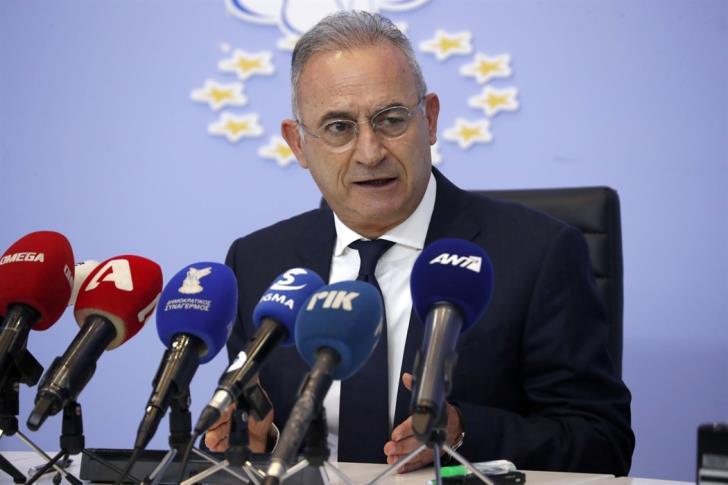 Averof Neophytou moved forward, who was as expected yesterday the only one who submitted an interest for the anointing of the Democratic Alarm candidate for the 2023 Presidential. Today his candidacy is confirmed by the Politburo of the party and from tomorrow he rolls up his sleeves work to reach alliances with all political forces except AKEL, with Pindarou wanting at all costs to put an end to the issue of presidential elections and put a brake on the course of introversion in which the ruling party has entered for several months.

The president of DISY in his first statement after the submission of his interest, set up bridges of cooperation, essentially addressing an invitation to the forces of the center to reach alliances. He even suggested the credibility of both himself and the Democratic Alarm as it has been tested through parliamentary collaborations. He even stressed that DISY has its positions on all issues, but also has the flexibility to achieve collaborations and mergers, citing as an example the issue of GESS. He even highlighted the close cooperation that DISY had with DIKO in Parliament, in matters of economy and in the voting of the budget, indicating that there are many commonalities of DISY with the parties of the Center and that these are more than the commonalities that the Center parties with AKEL.

“That's why I stressed that we are also credible to chat with other political forces. And it has appeared in recent years with a government of a parliamentary majority. “Because parties located in the center area behaved responsibly and we credibly”, he noted, stating that before March 12, contacts for collaborations will begin. “Because we had a very good and successful government,” he said, adding that there are strong foundations through the “Cyprus of Tomorrow” program to continue the development process, but in order to do so, alliances are needed, declaring readiness in a very credible way. , to build alliances.

Continuing the president of the Democratic Alarm and emphasizing the reasons that there can be no cooperation with AKEL, he also responded to the attack of Stefanos Stefanos that he unleashed on the Government. Averof Neophytou stressed that instead of a proposal, AKEL wants to block the road to DISY. “To achieve what?” He wondered. “To restore the policies of AKEL that led us to bankruptcy? And since then to fight with the people to stand on our own forces and with AKEL putting obstacles. We will definitely not cooperate with AKEL “.

He also stressed that he and his party have always had positions on all issues, but also the ability to be flexible about collaborations. “We have proved it for nine years in Parliament. We proved it in 2013. We did not hide, but we found solutions under the circumstances. We proved it with the budget. We are not a party of exclusions. There is an issue with AKEL. Because their philosophy is such that they are not ready to enter into a pragmatic dialogue. They live and govern to be anti-alarm. DIKO supported the economy. Support budgets. I believe that DISY has much more in common with the central space, than the central space with AKEL “, said Averof Neophytou

Averof Neophytou presented in his initial position the main axes of his policy on which will be based the governance program that he will present to the citizens, for a modern and better future for young people. “A country,” he said, “based on a modern, developmental, economic model, green and digital. “With a welfare state that will embrace the weak, with institutionalized transparency and absolute accountability,” he said. “With the biggest reform of all, the resolution of the national issue. “Because we and our children want to live in a free and reunited Cyprus, in a way that ensures the survival and dignity of the Cypriot Hellenism and the prosperity of all Cypriots without exception.”

Outlining the characteristics of his candidacy through his position on the challenges that our country has to face, Averof Neophytou spoke about the need for experience, ability, but also courage and determination .. “With an uncontrollable Turkey. With a Europe in reconstruction. In a very fluid geopolitical environment. ” But also at home, he continued, both social and economic challenges. “All of this requires both experience and skill,” he said. Much more, he continued, boldness and determination, willingness to enter the battle, to enter the fire for the benefit of the homeland. Flexibility for right solutions and even more difficult consensus, he added.

“I strongly believe in the unlimited potential of our people to look ahead. Overcome difficulties, turn challenges into great opportunities and reach higher. I believe deeply in the unlimited possibilities of our country to evolve and progress. “We will put the best future into practice all together, with hope and optimism,” he noted.

“DISY will be in power again”

The president of DISY was also asked to comment on the resignation of Nikos Christoudoulidis from the Ministry of Foreign Affairs and whether there is a question of party discipline, if and when he moves outside party frameworks, answering that he heard and was glad that Nikos Christodoulidis declares that he is an Alarm. “I would very much like him, after our bold and courageous proposal to go to the grassroots, to have put his candidacy in his own party. From there, he made his decision not to claim through internal party procedures. We respect his decision. “

Asked if a candidacy of Nikos Christodoulidis will make it difficult for DISY to win another 5 years in the Presidency of the Republic, Mr. Neophytou said that DISY “will be in power again. I say this with great modesty, because we consider it our obligation to ensure, through the right policies, the stability of the country “. That is why, he stressed, they are credible when chatting with other parties. It appeared in the 9 years, he continued, where a government of a parliamentary minority managed with the right manipulations to gain the necessary majority in Parliament, because parties in the center of the opposition behaved responsibly “but we also trusted”.

Asked to comment on whether there is introversion in DISY, he said that he does every day what he can to ensure not only the unity of DISY but also the stability of the country. That, he said, is the historical role of this faction. “As the president of this party, regardless of the expression of my interest to run as a candidate of my party for the good of the place, I had, have and will continue to have priority and the unity of my party and the interest and the good of my place “.